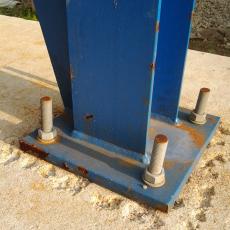 Most structural designers call for an inch or two of no-shrink grout below the baseplates of structural columns. While anchor bolts are installed with nuts to jack and plumb a column, the load is intended to be carried largely by the grout. This means that it needs to be installed on a prepared surface, mixed correctly, and placed with good workmanship to the approximate depth required.

In almost every developing country where EPR has inspected plants, the same recurring problems are visible. Typically, the workman are unaware of the purpose for the grout and methods required to create an acceptable final product.

In the photos, at least three major flaws are shown. First, the foundation surface was not bushed prior to setting the column and instead some half-effort to rough around the joint is attempted. Second, there is insufficient space to apply grout below the baseplate. Third, the grout is poured around the joint, as opposed to being packed under the baseplate. It is clear the workman think grout is simply a "dressing" rather than a purposeful component of the structural system.

Most of the time, the condition is not repairable.  Owner had to accept the defect.